Monkey Bars states its ambitions unambiguously: to faithfully reproduce for the audience the all-too-often-ignored voices of children. Playwright Chris Goode, in collaboration with counselor and self-proclaimed “specialist in dialogue” Karl James, interviewed school children across England, transcribed their words, and edited them into a play made out of 30 vignettes. Goode, whose inventiveness is limited by the restrictive conditions he has set himself, relies chiefly on two means: selection and alienation-effect. Firstly, he has to cull dramatically interesting dialogue from a mass of raw material, much of it no doubt unpromising, and his choice of scenes ultimately coheres around a few recurring themes — family, politics, religion, gender, careers, growing pains — which does endow the finished product with a small measure of unity. The scenes that end up on stage are, for the most part, humorous and engaging, though rarely challenging. Secondly, he attempts to coax the audience into reexamining routine scenes from daily life by transposing the children’s dialogue into adult situations – political debates, job interviews, cocktail parties – thus creating a form of alienation-effect. 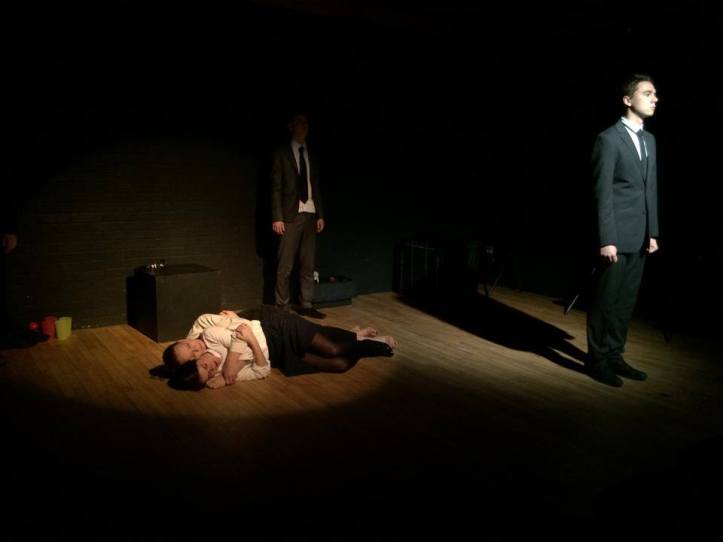 For this reason, the production rises and falls on the level of the acting, for much of the dramatic interest comes from the incongruity of having grown men and women play children. Here, under the guidance of director Siwan Clark, the overall performance concept always steers a middle road between childhood and adulthood: the actors neither commit fully to being adults and speaking their lines earnestly, nor (with the exception of the prologue with the boy who sings to his jelly) do they adopt clichéd physical mannerisms to indicate that they are children. Instead, they play their scenes as if they were children playing house, pretending to be adults – no mean feat for adult actors pretending to be children. When they do choose to reveal their childishness to the audience, the actors almost always opt for subtle means – a furtive glance, a casual slouch, a mock-confident posture, or a half-self-conscious smile – over gross ones. Their performances are fluid and rarely draw attention to themselves, with Callum Lynch and Connie Treves standing out especially through their ability to smoothly transition between a wide variety of different characters. The other actors, though excellent, do show seams in their performances as they sometimes allow their personal mannerisms to prevent themselves from disappearing into their roles. On the whole, they are effective in milking as much humour out of the play as it can yield, and credit has to be given to the director for blending their performances in such a way that they match each other in quality and intensity, lending some coherence to a fractured and episodic play.

The more purely visual aspects of the production are perhaps less successful. To be sure, the manipulation of colour in the show, juxtaposing the monochrome outfit of the children with a precise blend of warm and cool light (designed by Becki MacDuff), does complement the dialogue and liven the play without being intrusive. In particular, set designer Zoe Dickey’s choice of conveying scene changes through having actors use coloured chalk to draw a variety of items – podiums, wedding cakes, lounge chairs – on stage blocks serves two purposes: it allows pacing to be brisk and augments the whimsical nature of the text. However, the abstract dance interludes are less successful. The opening number involve actors making their entrance to the sound of low-key electronic ambience music, walking only in straight lines past each other, staring straight ahead, giving the choreography an impression of clockwork. While this does set a kind of vague mood for the play, it is hard to say what exactly is being conveyed: are these children brutalized by the mechanical conformity of modern life? or are these rigid adults presented solely to contrast with the freer, more genuine children? In any case, the choreography seems as if it were content to merely gesture towards being a piece of abstract dance rather than actually trying to be a piece of abstract dance. The closing number is even more egregious, for it is the only section not underscored with the aforementioned electronic music (superbly designed by Eric Foster) but with a maudlin lyric. This is especially unfortunate because the production, despite the ample opportunity it has to sentimentalize childhood and turn the play into a feel-good affirmation of conventional virtues, has largely steered clear of that trap. The closing number is therefore especially jarring with the way it aestheticizes childhood using none-too-original means. 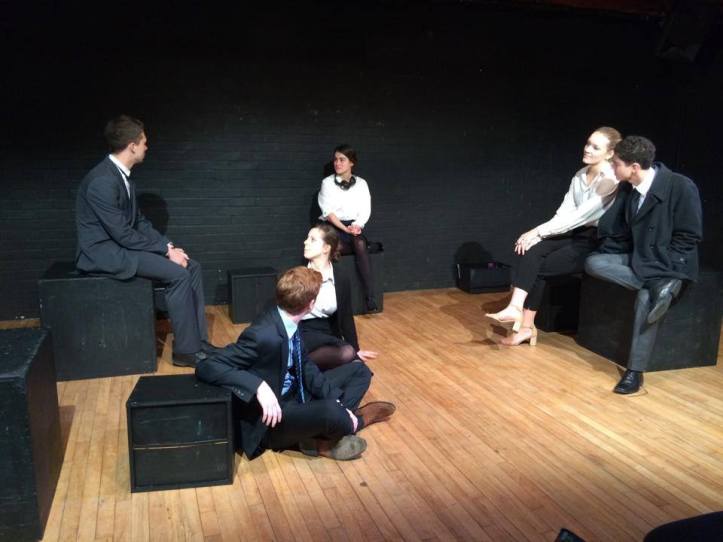 This fundamental conventionality of the text, rarely stressed by this particular production but always present as an undertone, is all the more problematic because it also perpetuates conventional prejudices, and does so quite unconsciously. For example, the only two scenes that explicitly deal with religion as a topic chooses Muslim children – and those raised in very conservative households at that. The vast majority of moderate Muslims do not, as one character does, find music haram, and would think the notion that you can’t say the word “cross” laughable, since orthodox Muslim theology reveres Jesus as a Prophet. And I trust that no explanation is needed as to why another character who relates that the Quran says “God loves war” is a gross caricature.

This brings me to a difficult question: how to talk about the ideological content of a verbatim play? If verbatim theatre is to be critiqued as serious theatre, it must be assumed to be just as undergirded by ideology as any other narrative. Using found dialogue inherently masks the ideology of a text, for it presents itself “as it really happened” – even though the author’s point-of-view shapes the material from its genesis, whether through James’ choice of interview subjects, or Goode’s editorial discretion in selecting 42 children out of the 70 interviewed and picking particular strands of dialogue out of context. Asserting that these words really were said, somewhere, by real children, does not in any way absolve the playwright of responsibility. The text starts from the pious premise that the voices of children are too often ignored, and then flatters the audience into feeling better for listening to the voices of children on stage, rather than, say, in real life. Indeed, there is very little dialogue in the play that one can’t hear simply by talking to real children; and while that is the point, what makes the play safe and unchallenging to the audience is precisely that it serves the dialogue of children in concentrated doses, filtering out the boring static that is an unavoidable part of meaningful interaction with real children, as any parent or babysitter can tell you. The audience can feel good for listening to stage children, have all the fun, skip the chores. This may all seem perfectly harmless, but the fact remains that the numbing conventionality of the play can easily become a way to hide sinister prejudices – prejudices never registered as such by an audience lulled into complacency, precisely because of how conventional the prejudice is. While this production managed its best with the material, the deeply safe nature of Monkey Bars isn’t just a problem with its surface – it undermines the whole.