While studying composition at university I wrote a string quartet in which every pitch and rhythm was determined by a formula. My favourite moment in the nine-minute-long piece was a bright, brief G major triad, a chink of light breaking to the surface through a mist of dissonance. It reminded me of the first string quartet that I had ever written, a naïve, flawed piece that I was nonetheless very attached to. I found the moment beautifully unexpected: arising from within the piece’s inflexible rules and dense harmonies came a fleeting glimpse of simplicity and nostalgia.

Peter Els, composer-protagonist of Richard Power’s novel Orfeo (longlisted for this year’s Man Booker Prize), is forever preoccupied by such tension between beauty and academic innovation, secretly longing for the former even as he doggedly pursues the latter. His most recent compositional venture: to code music into bacteria. After police become suspicious of Els’ home laboratory, his house is raided and he becomes a fugitive, sensationalised in the press as the ‘Biohacker Bach’. Els’ artistic endeavour is an extreme one, perhaps, but by no means an absurd one: his composition with bacteria is modelled on the work of bioartist Steve Kurtz, whose own home laboratory was investigated by the FBI following the death of his wife. 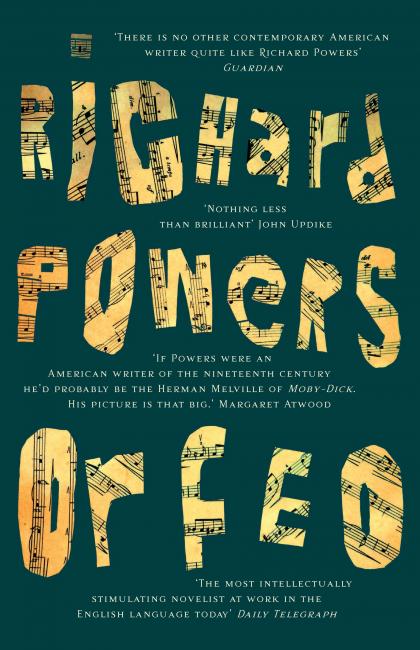 Orfeo hops between two narratives, past and present. The former is a recollection of Els’ life up to the raid, while the latter follows him as fugitive. Powers handles the balance between the two remarkably well: one fleshes out the novel’s characters; the other gives it forward momentum. An aphorism or musical witticism is placed at each divide between one time period and the other, the meaning of which is revealed at the end of the novel.

Orfeo’s structure reflects its concern with the complex relationship between music and time. The past: Mahler’s Kindertotenlieder sends Els’ mind spinning back to an adolescent romance with a cellist named Clara; his own compositions prompt recollections of his soprano ex-wife and their daughter. The present: Shostakovich’s  Fifth provides the score for a cross-country drive; Els’ elderly pupils listen to Messiaen’s Quartet for the End of Time and hear life stretch out before their very ears. And life yet to come: uncertainty; Els’ desire for compositional immortality. The novel’s two-page ‘overture’ tells us that he ‘wants only one thing before he dies: to break free of time and hear the future.’

To write about music is a challenge, but Powers handles it admirably. He does not shy away from technical terms, but is just as ready to fill his pages with evocative metaphors or biographical contextualisation: a group of singers battle through ‘a thicket of tangled harmonies’ before losing their way and ‘tumble laughing into a ditch’; Messiaen’s Quartet is accompanied by an extensive account of his experience of war camp composition. In both cases, Powers manages to please lovers of classical music without losing a wider appeal. Whatever the audience, Orfeo remains highly accessible, amusing and surprisingly moving.

‘Orfeo’ is available to buy from most bookstores, RRP £8.99.