Art and Anthropology: After Hours at the Pitt Rivers Museum

Once a month, the Pitt Rivers Museum remains open for the evening and presents a free, themed programme featuring talks, screenings, and/or music displays and a chance to wander around the museum and soak up culture from around the world. On the 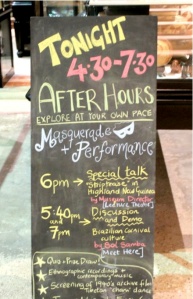 20th February I attended their ‘Masquerade and Performance’ event which showed a screening of a 1940s archived film of a Tibetan cham dance; a discussion of Brazilian carnival culture and a drumming demonstration by the Oxford Sol Samba group; a special talk by the Director of the Pitt Rivers on performance in Highland New Guinea; and finally, the ability to roam through and explore the ground floor of the museum whilst listening to Central African carnival music in the background.

The discussion of Brazilian carnival culture focused mainly on the Maracatu, an ancient carnival tradition from north-east Brazil. Sol Samba, the Oxford group that performs the Maracatu, talked about its roots and unique qualities, accompanied by a quick drumming demonstration. The tradition, they explained, originated from the sugar plantations and slave estates of Pernambuco state (which explains its African-sounding beats) and now forms the colourful parade of drums, dancers and masquerades in the Recife Carnival. Each group which performs the Maracatu has one original rhythm, beat and dance as well as a host of common ones, and features mainly drums. The demonstration was a great insight into Brazilian carnival culture, albeit somewhat brief.

The anthropology lecture given by Dr Michael O’Hanlon, Director of the Museum, focused on the Wagi of Highland New Guinea, and their costumes, decoration and performance. He named the talk “Striptease” but explained that it was more the putting on, thank taking off, of costumes for these festive and marital occasions which showed the strength of the people. The oiling of the skin, the delicate headdresses with tall, black feathers, the brightly coloured shields all displayed the unity and strength of the community to spectators and, indeed, the opposition, as the most splendid decorations were taken to war. Spectators could judge whether or not the performers trusted each other and were in sync; the more they were, the better impression they gave.

Whilst walking round the museum, both the Tibetan cham dance was screening and recordings were playing; you almost felt culture surrounding you. I later found out that the recordings were ejengi (a Bayaka spirit who is summoned for initiation ceremonies) from the Louis Sarno Collection of Bayaka recordings from the Central African Republic. The rhythmic beats and the monotone singing really captured the mood of the museum allowing me to experience it in a completely different way and almost allowed more focus on the objects. Over a quarter of a million objects are now displayed in the museum, extending over three floors and a significant increase on the 20,000 objects on show when the Museum first opened in 1884. The Pitt Rivers was founded when Lieutenant-General Augustus Henry Lane-Fox Pitt Rivers, an influential figure in the development of archaeology and anthropology, bequeathed his collection to the University. Something from the original collection can now be found in every case – usually with a small, explanative, carefully hand written label. There are far too many cultures, areas, and societies to list here; but I will say the depth and variety of the objects is absolutely vast and it makes this museum by far the most unique in Oxford. 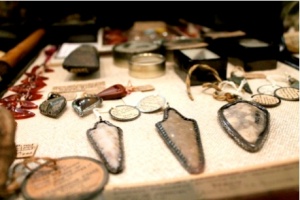 In most ethnographic and archaeological museums, objects are displayed and arranged according to geographical or cultural areas – Africa will be in one section, Asia in another, and Europe in the corner, but the Pitt Rivers arranges them according to type: all the masks are in a cabinet together, the amulets, jewellery and charms are displayed delicately next to each other, the weapons (the rifles, the whale harpoons, the spears) each have their own section, even the skulls and shrunken heads share the same case. In displaying the objects this way, it is easy to see how different cultures solve similar problems at different points in time, how

each culture creates art, theatre, music, and religion. And at first it’s overwhelming, there are too many things to look at in just one cabinet – you could spend an hour just looking at all of the different flutes. Even stepping back from the cabinets, totem poles and boats tower over you; and in the dimly lit room it’s easy to get a bit lost…

But when you focus on a specific case or cabinet and find something that catches your eye, you begin to see the beauty of the museum. The objects are so beautifully made, crafted and designed and when displayed all together it becomes a treasure trove (at least for anthropologists, like myself). The variety and number of objects is unimaginable until you have been to see for yourself, pictures don’t do it justice. And although it does feature a few skulls, a couple of shrunken heads, and some very scary masks; it really is worth a trip. Or two. And probably more.