After the success of ‘An Evening with the Gods’, the Ashmolean Museum is opening its doors for another LiveFriday, this time on the theme of ‘Music Technologies: Old and New’. The open evenings are designed to 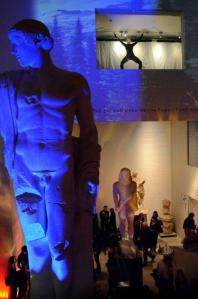 build community interaction with history, consolidating the links between the Ashmolean and Oxford University; this evening is held in association with the Faculty of Music. Technology has radically altered the way we compose, consume, and create music, be it through sound recording, the use of electronic instruments, or globalised transmission of music. The evening is guest curated by Heather Professor Eric Clarke, specialist in music and psychology. He and Dr Roger Allen will be demonstrating gramophones at the event (so bring along your vinyl records), while Dr David Maw will be improvising live to Luis Buñuel’s silent film Un Chien Andalou, projected onto the Ashmolean walls.

Alongside the gramophone demonstrations will be other interactive sets, including an opportunity to try different styles of DJing with several different DJs as part of Dr Lisa Busby’s interactive research project Shit, I can DJ! (come with your iPod, minidisks, cassettes and records to join in!), and to play the theremin – the only instrument that can be played without being touched in any way. Lydia Kavina, taught by Léon Theremin, the inventor of the theremin, will be demonstrating how to play this unique instrument. Two antennae generate an electromagnetic field, and hand placement within the field is used to control pitch and volume. Also in the field (no pun intended) of electromagnetism is Ray Lee, whose work The Ethometric Museum won the Sonic Art category in the 2012 British Composer of the Year. The interactive installation piece comes with a narrative of its own; the composer acts as the Ethometric Museum curator in an imaginary exhibition resurrecting instruments from a previously unheard of branch of science. Theatricality is paramount, highlighting audience investment in a performance, whether or not it is of an experimental nature. His work Chorus, which premiered at the Oxford Castle Quarter last November was one of the most compelling installations I’ve experienced; pre-recorded electro-acoustic sound was broadcast from speakers atop towers with rotating arms, with the speed of the rotation controlled manually by the composer moving through the performance space. As the performance escalated it became impossible to distinguish where each sound was coming from, making it both a disorientating and immersive experience; no doubt The Ethometric Museum will prove one of the highlights of the evening.

Continuing with innovative, immersive sound experiences, Oxford University’s newly formed Laptop Orchestra (OxLork) will be performing with their eclectic combination of digital instruments, with sound projected through ‘hemispheres’, specially designed omnidirectional speakers. The ensemble describe themselves as a group of ‘individually expressive players’. Andrew Watts, speaking on behalf of the ensemble, said that “Personal expression is one of the most fundamental elements in the creation of music, and using laptops or other digital controllers can keep the excitement of live musicianship intact while embarking on new

In the same way that Ray Lee’s Ethometric Museum encourages a redefinition of the boundary between listener and performer, so too do OxLOrk’s performances encourage a new perspective on the definition of ‘performer’, Watts explains. “For traditional Western classical concerts, save musical theatre and opera, there is minimal on stage action. The performer or ensemble is generally either sitting or standing in one place to play their instrument(s). At an OxLOrk concert movement is integral to the creation of the music. Certain virtual instruments rely on motion sensors, while others utilize tilting or shaking the computer. Physical controllers, like tethers or wii-motes, also make movement an essential part of the performance. Lastly, multimedia displays a large role in OxLOrk. Our concerts take advantage of projectors, webcams, and other live video displays… Using laptops as instruments allows for a re-evaluation of what an instrument is. In part, this re-defines the concert experience by breaking down expectation. The performers are able to be creative in perhaps a more intuitive way. Rather than requiring years and years of lessons and practice to develop mastery, or even proficiency on a virtual instrument, performing with the laptop harnesses natural musicianship. Physical gestures become musical phrases. Thus, the re-definition of creativity with the laptops is through a visceral directness between performance input and sound production.”

With the M@SH Ensemble, led by Chris Garrard, occupying the Atrium to perform Tipping Points, a site-specific audio installation that responds to the museum’s multiple levels, and Jack Goldstein (part of the five-piece experimental psychedelic pop band, Fixers) and visual artist Gloria Lin performing John Cage’s Indeterminacy, the museum is guaranteed to be filled with entertainment for the whole night. Further into the evening, the Orchestra of the Age of Enlightenment and The Original Rabbit Foot Spasm Band will be performing in the rooftop dining room and the café respectively. The Original Rabbit Foot Spasm Band brings an inspired and unique form of jazz, as an Oxford-based folk-inspired Rhythm and Blues Calypso Jazz Band drawing influence from 1920s/1930s jazz. If you have always wanted to draw music from thin air, immerse yourself in an imaginary museum of musical artifacts, listen to the sound of a wax cylinder being played, learn how to DJ using domestic devices, or simply want to experience something new, then this LiveFriday is guaranteed to surpass expectation.

‘Music Technologies: Old and New’ will be held at the Ashmolean Museum on Friday 22nd February from 19:30-22:00. Tickets for the late-night events can be booked here. The Next LiveFriday will be China Night on the 26th April, in association with the Faculty of Oriental Studies.