Review: It’s Me to the World at Modern Art Oxford

At first glance, the exhibition was somewhat underwhelming. All I could see was a labyrinth in white China clay on the floor, a huge dot in graphite on a low wall. There was silence, other than an audio installation rumbling intermittently in the background. But as I found my way through the subsequent galleries at Modern Art Oxford, more insightful and compelling works came into view.

‘It’s Me to the World’ is the penultimate installment of Kaleidoscope, the yearlong exhibition celebrating the 50th anniversary of  Modern Art Oxford. Following ‘Mystics and Rationalists’ (an exhibition focusing on conceptual art and its power to eschew narrative logic), this display sets out to explore ideas of perception, intimacy, and endurance. The title is taken from a quote by Richard Long: ‘My footsteps make the mark…It’s like a way of measuring the world. I love that connection to my own body. It’s me to the world’ – an exceptionally topical sentiment in our hyper-connected world.

Unfortunately, the theme was approached in an excessively broad way, with works relating to place, identity, sound, geometry, a fear of death, landscape, the life of the mind, abstraction, and memory. As a result, the exhibition ended up feeling a bit haphazard, with the individual works brought together by an extremely general framework and read simplistically under that general label. After seeing ‘Mystics and Rationalists’ and ‘The Indivisible Present’ earlier this year, ‘It’s Me to the World’ felt less successful as a display, not so much for the quality of the single works, but for the less thoughtful way in which they were conceptually brought together.

That said, it would be unfair not to recognise that some artworks were arresting and relevant. In particular, ‘Tsumeb Fragments’ (2015) by Otobong Nkanga, was the most successful of the entire exhibition. Consisting of six modular metallic structures, the installation included found objects (including a spinning rock), images, photographs, videos, and sounds which all focused on the exploitation of copper mines in Namibia, and dramatic changes to the natural landscape under German colonisers. Crumbled as mine rocks, the work conveys a sense of displacement and fragmentation, exposing, but almost celebrating, mines. In the artist’s positive reading, mines are reclaimed as monuments, acting as testaments to the legacy of colonialism in Namibia. This, I thought, was an extremely thoughtful way to flesh out the theme ‘Me to the World’. ‘Tsumeb Fragments’ managed to speak of the individual (featuring the artist herself in one of the videos) and the world, by distilling her perception of and response to it. The other poignant reflection of individuality and place was ‘Viral Landscapes’ by Helen Chadwick, previously exhibited at Modern Art Oxford in her solo exhibition in 1989. Print photographs of costal scenes and hilly landscapes were overlaid with painterly marks in bright colours. Besides being aesthetically successful, the work gained a further layer of meaning from the fact that such marks were made from the cellular tissues of the artist herself. In this way, the photographs embodied the visceral connection we can develop with places, as we inhabit them and create memories stemming from them. Indeed, places become part of ourselves, as much as we leave our own mark onto them. 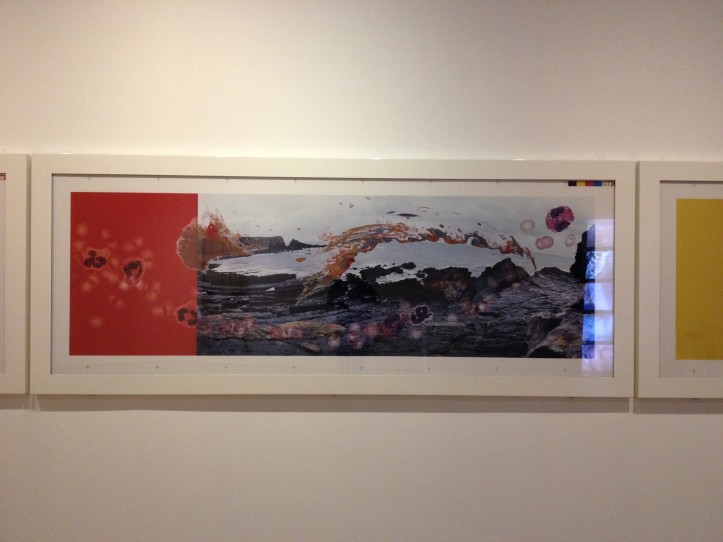 The rest of the works on display paled in comparison to these two. After the nearly empty first gallery, the exhibition spaces featured works by Marina Abramović, including a video installation of the artist washing a human skeleton (‘Cleaning the Mirror’) and several pieces of crystals attached to the walls (‘Black Dragon’). Though beautiful to look at, the crystals almost lost their purpose as works of art. Originally, people were meant to lean on them, as the work was supposed to comment on the therapeutic power of crystals by offering the audience the chance to feel it for themselves. Here, however, they were displayed for a purely contemplative purpose, which I thought deprived them of their artistic soul. Not being able to engage with the work as the artist originally intended, and in particular not being able to touch it, meant that the installation lost part of its original force. If the exhibition’s goal was to emphasise the re-connection with our own environment, viewers of  ‘Black Dragon’ remained coldly detached from it. Featuring some truly brilliant works, the exhibition is appreciable in a number of ways: the proposed subject, the wide array of acclaimed international artists, and the acuity of a few artworks. I only hope that the last chapter of Kaleidoscope, ‘The Vanished Reality’, will succeed as a holistic display, functioning as a cohesive whole as well as shining with precious, independent gems.

‘It’s Me to the World’ runs at Modern Art Oxford until 17 October. More details on the exhibition are available on the museum’s website, here.