The Culture of Modernity: Pictures from Calcutta

What does it mean to be modern? The question informs the work of many Bengali artists and writers, who try to confront the challenges posed by modernity. Issues ranging from the emergence of urban life and the new role of women in society, to the country’s evolving relationship with its colonizers, have been tackled in many artistic productions since the 19th Century.

Marshall Berman, author of All That Is Solid Melts into Air, maintains that modernity and city life are closely connected:

To be modern is to find ourselves in an environment that promises us adventure, power, joy, growth, transformation of ourselves and the world – and, at the same time, that threatens to destroy everything we have, everything we know, everything we are.

Even though rural areas are equally affected by modernity, it is the city here which comes to encapsulate the most distinctive features of modern life, such as the acceleration of time and the modification of space, new technologies, political struggles, social change, and most recently, globalisation.

In this sense, ‘modernity’ is not an exclusive characteristic of the global ‘north’, but a universal experience which involves and challenges the whole contemporary world. You can be modern in Beijing, Nairobi, Mexico City, London, St. Petersburg or Calcutta.

In an attempt to interrogate Calcutta’s unique modernity, Bengali intellectuals have examined the city’s past and present, history and its geography, and unlocked new ways of looking at its complexities.

In the Arcades Project, Walter Benjamin argued that modernity established, for the first time, a difference between private space and public space. In 19th century Calcutta, theatres, halls, public schools, as well as centres of colonial power become arenas in which the males of the Bengali middle and upper classes lived their public life, organized themselves and thus challenged colonial power. The house remained the dominion of women, who often could not access the public sphere. Traditionally, women were supposed to withdraw into ‘purdah’. They were required to cover their bodies, lived in a separate part of the house, and had very limited access to activities outside their home. 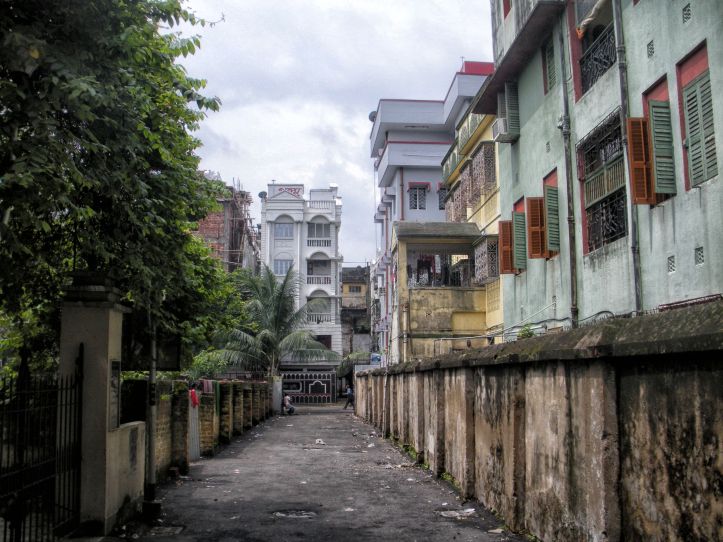 Buildings old and new on a Calcutta city street. Photo by author.

Two films by the Bengali director Satyajit Ray, Charulata (1964) and Ghare-Baire (The Home and the World, 1984), based on two novels by the Nobel-Prize winner Rabindranath Tagore, explore the consequences of the outside world entering the domestic sphere.

Charulata tells the story of a lonely wife, Charu, who lives secluded in her house in 1870s Calcutta. Her husband Bhupati is too busy running a newspaper to keep her company and help with her writing, so he invites his cousin Amal to do so. Amal helps the incredibly gifted Charu, and she even publishes a story in a literary magazine. But the two feel more and more attracted to each other. Amal does not want to start a relationship, and abruptly leaves Charu’s house. The woman is left heartbroken, and her husband has to pick up the pieces of their broken marriage.

Ghare-Baire is another story of a love-triangle. Bimala is the wife of a rich Bengali, Nikhil, who happens to host his friend Sandip, one of the leaders of the Swadeshi movement in 1905. Bimala is increasingly fascinated by Sandip’s activism and becomes involved in political activities. At the same time, she turns away from her husband, who refuses to be take part in the movement. Nonetheless, Nikhil encourages his wife to discover the outside world, as he believes she cannot live confined to the house, from which the title of both the film and the novel arises. The tragic end of Nikhil and Bimala’s story does not question the involvement of women in politics, but the deadly consequences of a blind nationalist position.

Both these stories focus on women. Charu and Bimala are initially encouraged by their husbands, but then venture alone into the outside world, and suffer the consequences. The negative ending of both stories does not necessarily imply, however, that women should refrain from public activities. On the contrary, Charulata and Ghare-Baire have the great merit of confronting women as well as men with the challenges of modernity.

In contemporary Bengali literature in English, the private world of the family home is equally portrayed in contrast to the outside world. For instance, in his novels and short stories, Amit Chaudhuri sketches middle- and upper-class lives with mundane concerns. The realm of the private and the familiar occupies a central space not as an allegory of the nation, as it is often the case in much postcolonial literature, but in contrast to the disorder and disruption of public life.

The question is put differently in the fiction of Amitav Ghosh or Neel Mukherjee. In novels such as The Shadow Lines (1988) or The Lives of Others (2014), it is the modern, external world which enters and disrupts family life. War, politics, communal riots have all the potential to alter abruptly and profoundly the destinies of entire families.

The protagonists and the creators of a discourse on modernity in Bengal were the bhadraloks. The term designated the middleclass (bhadra means ‘gentle’, lok means ‘folk’), in contrast to the chhotoloks, the lower classes, and the zamindars, the landed gentry. In the 19th century, with the Bengali Renaissance, the middleclass started to distance itself from tradition, and to explore new forms of thinking and writing. Not only did they produce a literary and artistic canon, through newspapers, journals, fiction, poetry and the figurative arts, they also created themselves as modern subjects.

Calcutta’s cultural life has been dominated by great intellectual and artistic figures like the writer, poet, and painter Rabindranath Tagore, and the director Satyajit Ray. To them, among others, I would like to add the 19th Century social reformer Ram Mohan Roy, the novelist Bankim Chandra Chatterjee, and the poet Jibanananda Das. In the figurative arts, painters such as Abanindranath Tagore and Nandalal Bose; and in the sciences, the physicists Jagadish Chandra Bose and Satyendra Nath Bose.  In more recent times, writers and intellectuals such as Mahasweta Devi, Amitav Ghosh, and Amartya Sen, along with directors Mrinal Sen and Aparna Sen, the photographer Raghubir Singh, and the musician Ravi Shankar have been or are still based in Calcutta. It is of course a partial listing, but it gives an idea of the breadth and depth of Calcutta’s cultural life. 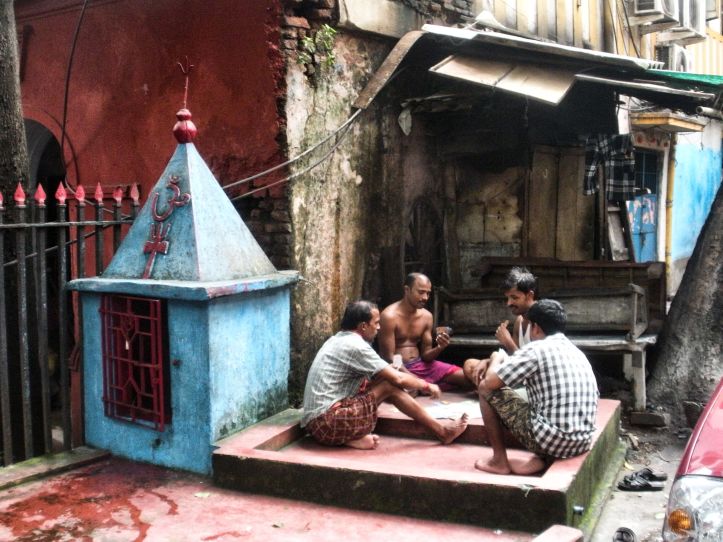 A street gathering, or adda. Photo by author.

Perhaps the most distinguishing social practice involved in the creation of modernity in Calcutta was adda, extremely common until the 1960s. It involved gathering either in private homes or in street corners to discuss intellectual matters or just gossip, and was a predominantly male and middle-class activity. Though adda was often perceived as a lazy and useless occupation, it promoted intellectual contemplation in the wake of capitalism and materialism in India.

The bhadralok’s education comprised both Indian and European traditions. Many bhadraloks were anglophile, read Anglo-European literature, and were fond of imported products. Under the British Raj, they were usually employed in administrative or educational positions. Yet this did not prevent some of them from promoting the first reform and pro-Independence movements, like the Swadeshi struggle in 1905.

Satyajit Ray was perhaps the last great bhadralok intellectual. Nowadays, bhadralok’s culture is fading as it is its relevance in Calcutta’s social and political life. Nonetheless, contemporary writers such as Amitav Ghosh and Amit Chaudhuri can be defined as the heirs of this culture. In this sense, they often refer to great Bengali intellectuals of the past in their works, and are still interested in similar issues.

As Berman points out in relation to Saint Petersburg, middle-class political activism in contexts of underdevelopment and oppression often resulted in urban violence. Indeed, disorder, change and, ultimately, a Communist revolution, came to be perceived as the only means to achieve social justice also in Calcutta.

Violence has been a disturbing feature of Calcutta’s public life, both in colonial and postcolonial times. The city’s political struggles have often involved rampant protests, riots, political assassinations, and even sporadic terrorist attacks. During the colonial period, urban violence was connected with the struggle for Independence, whereas in the postcolonial era it has been the expression of political or communal differences. For instance, one reason for moving the capital of the British Raj from Calcutta to Delhi in 1911 was the outburst of urban violence that followed the first partition of Bengal in 1905 and marked the Swadeshi movement. After Independence, the Naxalite movement of the late 1960s was a major cause of urban violence. Inspired by Maoist ideals, the movement wanted to bring a Communist revolution to India as well. In Calcutta, the movement involved mainly middle-class students, who participated in demonstrations and, in some cases, were recruited as active Naxalite members, in guerrilla-style attacks or taking part in political assassinations.

The movement was highly controversial and features in a number of works of art. Contemporary to the events, Louis Malle directed a documentary on Calcutta and included footage of Naxalite demonstrations in the city.

In their trilogies on Calcutta, both directors Satyajit Ray and Mrinal Sen focused on life during the turmoil of the 1960s and 1970s. As Naxalite activism disrupted daily life, it seemed impossible to keep a distance or not get involved either in politics or in the mechanisms of reciprocal exploitation. Satyajit Ray’s Pratidwandi (The Adversary, 1970) is telling in this respect. It deals with the story of a young man caught in the political turmoil. After the death of his father, Siddhartha has to drop out from medical school and look for a job. However, as he cannot conform to his sister’s career-oriented life, nor to his brother’s political activism, he remains unemployed. Thus, he is finally forced to abandon the city and work in a small provincial town.

In more recent times, two novels have focused mainstream attention back on the Naxalites in Calcutta: Jhumpa Lahiri’s The Lowland (2013) and, again, The Lives of Others (2014) by Neel Mukherjee. Both concentrate on how individuals and families are affected by political activism. In The Lowland, two brothers, Subhash and Udayan, are very close growing up, but are separated by their life choices: while Udayan decides to pursue graduate studies in the US, Subhash becomes a Naxalite. When Subhash dies, shot by the police, Udayan decides to take care of his wife and son. Similarly, The Lives of Others deals with a family torn apart by the choice of the eldest grandson, Supratik, to join the Naxalites. The novel is structured along two narrative threads, one which is Supratik’s first person account of his life as a Naxalite, the other which follows the intricate family events.

Calcutta, city of light and darkness

In his introduction to the second volume of Calcutta: The Living City, Sukanta Chaudhuri describes Calcutta as a city which breeds myths, both positive and negative. The image of the city as overcrowded by refugees and homeless is well known in the Euro-American world, mainly because of Dominque La Pierre’s City of Joy and Mother Teresa’s highly-visible activism. Equally, decades of failed governmental policies have contributed to foster the idea of a collapsing and decaying city. Yet Calcutta is still a place where independent editors can survive on publishing only Bengali poetry books, and a city whose cultural heritage and production is still renowned all over the world. As I have briefly attempted to show here, it is exactly this cultural production that can open up new and interesting ways to look at the city and its modernity.

Carlotta Beretta is a PhD student at the University of Bologna (Italy). Her research interests include postcolonial literatures, especially from the Indian Subcontinent, cultural studies, world literature and geocriticism. Her PhD project concerns the representation of Calcutta in contemporary Indian English literature, and the relationship between the city and modernity.