Review: ‘The University of Oxford: A History’

If I told you that the University of Oxford first received official recognition because of a murder, would you believe me? In 1209, a student of the academic establishment located in the town of Oxford killed a woman (presumably his mistress). The town, furious that the perpetrator had managed to flee, enacted their revenge on his housemates, hanging the two in his place. The remaining academics, either out of fear and disgust, or out of a desire to avenge the students, relocated their intellectualism (and thus their contributions to the town’s economy) to nearby centres, where they remained for the next five years. It would only be at the intervention of the papal legate, in 1214, that a compromise between the town and the academics would be reached, and the University of Oxford, as it would later become, would receive its formal recognition as an institute of learning worthy of papal protection.

With such a colourful beginning, it is no surprise that the 800-year history of the University, an institution ‘nearly as old as the monarchy’, continues to fascinate. To concisely capture the history of such a place is by no means a simple task. And yet, this is the task that L. W. B. Brockliss has tackled with his The University of Oxford: A History. The book elucidates the history of this renowned institution in only 871 pages, a mere snippet of previous works on the same subject. By way of comparison, The History of the University of Oxford, edited by T.H. Aston and published between 1984 – 2000, is comprised of eight volumes. Each of those focuses on a single century, a total of over 5,600 pages of history.

Brockliss’s work is a much more condensed overview, fitting given the purpose for which it was commissioned. It was intended to be a ‘one volume, single-authored history’ which would ‘produce an account of the University’s past which would be accessible to general readers.’ Brockliss, historian of education, science and medicine at Magdalen College, Oxford, has succeeded in achieving this: The University of Oxford: A History is generous in its detail and clear in its narrative. It’s a streamlined history, but this is to be expected of a single-authored volume. In part, its clarity is down to Brockliss’s structure: the book contains four parts (The Catholic University, c. 1100-1534, The Anglican University, c. 1534-1845, The Imperial University, c. 1845-1945, and The World University, c. 1945-2015) which have been constructed according to moments that Brockliss considers to be significant points of change in the University’s history. In structuring his narrative in this way, Brockliss, right from the very first pages, draws his reader’s attention to the periods (be they 400 years long, or only 40) in the University’s history which he argues have helped define, or redefine, its identity. 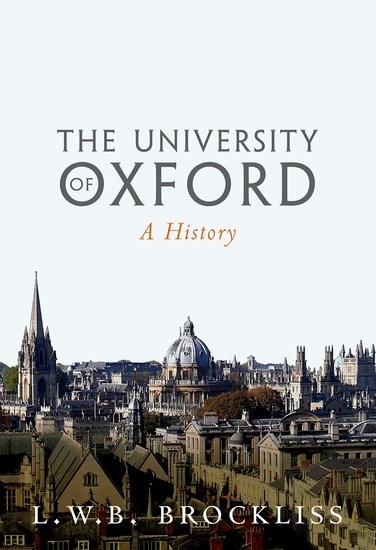 With his conversational narration Brockliss almost insists his reader take away more than a simple appreciation for how the University has developed and transformed over the last 800 years. The history he covers is complex, and he could easily have overwhelmed his readers with too much detail. Instead, staying true to his purpose to create a ‘general’ history, Brockliss instead has found a way to cleverly contextualise the tales he has chosen to tell. Bearing his audience in mind, he centres his narrative around those characteristics of the University that are amongst the most widely known. Oxford’s prominent architecture is one example: in the first chapter, he describes the beginnings of the Divinity School; as the chapters progress, he moves on to the foundations of the medieval Gothic-style colleges, such as Magdalen College, and to the rise in architectural classicism (in which Cristopher Wren was significantly involved – the Sheldonian Theatre is one of the most prominent examples). While these architectural examples naturally form a part of the University’s wider, overarching history, and are by no means the only features of the University Brockliss references with any detail, they provide a physical point of reference for his readers. One understands both how the University physically came to be that which it resembles today, and how it came to identify as it does. For example, in light of the ‘building mania’ of the late seventeenth and eighteenth centuries, which resulted in new college quads, buildings such as the Radcliffe Camera, and the opening of institutions such as the Ashmolean Museum (the world’s first public museum), the University began to attract not just scholars, but also sightseers: those keen to observe for themselves this new architectural ‘mecca.’ Today, as Brockliss points out, tourism is a defining part of the University’s modern identity.

Admirably, Brockliss does not shy away from providing critical analysis, most especially in his chapter conclusions. He explains that the University of Oxford has survived changes in religion, hierarchy, organisation, student demographics; that it has endured two world wars, the rise and fall of empires, and the introduction of nearly 300 men to the office of Vice Chancellor (the current Vice Chancellor, Louise Richardson, is the first woman to ever hold this role). And yet, as Brockliss observes in his final pages, the University has a number of challenges ahead of it, if it is to meet the demands of the modern world. He begins the conclusion of his final chapter by observing that in 1939, on the eve of the Second World War, the University of Oxford was the second largest of all the universities in Britain – it could claim more than a tenth of the students undergoing full-time tertiary education. In 2013, despite a four-fold increase in size, the University was now only thirtieth in size, and its share of Britain’s student population was below 1.5 percent. Despite its reputation for excellence and its continued status among the world’s top-ranked institutions, Brockliss unequivocally suggests that the University is once again at a crucial crossroads, a point that will again redefine its identity. Whilst refusing to be baited into ‘crystal ball gazing’, Brockliss’s final word on the University of Oxford is not without a word of caution: the University must find a way to continue to apply its pre-modern ideals to its post-modern present.