Review: ‘Land of our Fathers’

Theatre 503’s national tour of Land Of Our Fathers graced The North Wall with its presence for two nights this February, and its exploration of the struggles of miners in 1970s South Wales has haunted me ever since I was fortunate enough to see it.

With the rattle of a mechanical cage shuddering around us, the production plunged us down into the dark depths of a Welsh mine in 1979. Suited men, singing beautifully and patriotically in Welsh, held aloft a mighty banner proclaiming their membership to the Union of Mineworkers. But with a crash we were plunged into darkness, metal screeched on metal, and thus began our two hours of entrapment with six men who must hold on to the hope that they will be rescued — listening always for the sound of their saviour, a drill.

The context feels particularly relevant today — unions, strikes, recession, a Tory government. Why should they vote for this ‘Thatcher’ woman? Curly, although one of the youngest out of the six, was played with a sense of premature masculine grandiosity by Tomos Eames. He states with authority that the young Mostyn (Joshua Price) should be voting for a future leader based on two credentials: Do I trust this person? And can they relate to my needs? Apparently, the pearl-necklaced, purple-permed Margaret Thatcher is relatable for Mostyn — she sounds like Mostyn’s gran, and Mostyn is related to his gran.

Although Land of Our Fathers is not based on a true story, playwright Chris Urch researched the characters’ patois and cultural backgrounds by spending time with Welsh ex-miners, and incorporating their mannerisms and dialect into this ever-evolving script – even making specific adaptations each time it has been adopted by a new cast in order to fit more closely with the actors’ interpretations. His air of Welsh dry wit, piss-taking and camaraderie is an important thread throughout this production — derived from the script, but embedded in the chemistry of the relationships on stage. The script provides an incredibly intelligent exploration of these complex male relationships, all the while posing questions about social and geographical mobility; whether or not you can have a ‘proper job’ in the arts; the inability to relate to disability, parenthood, childhood; and above all the distinctively male discomfort with discussing all of the above. 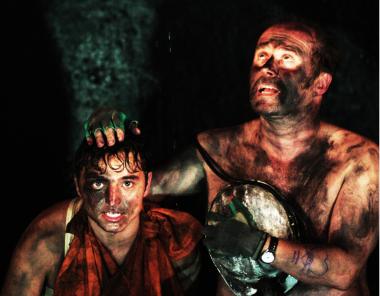 The writing uses mercurial shifts in mood to maintain an air of darkly humorous irony: one moment the characters are discussing all of these important notions, the next they’re arguing about who ate the last Blue Riband. Hope of being found is the only thing that drives them to continue to survive, rationing all of their food and water carefully. The lengths they must go to in order to live were gut-wrenching to witness, and gave a sense of realism that would be more difficult to relate to on screen. The liveness of theatre is probably the only medium where you could truly begin to feel trapped alongside the characters, and thereby feel all of the turbulence of emotion and trauma that goes along with this desperation to simply continue existing.

This sense of back-and-forth between huge ideas and tiny issues, the macrocosm of the world and the microcosm of the mine, was an effective way to continually engage the audience and develop relationships with each character as they trudged towards a steady mental and physical decline. And despite all efforts to maintain some notion of dignity in their choice of career, there is no escaping that the job has led them to this situation — as it was put so poignantly, ‘What mother wants to see their children down a mine?’

This was also reflected in the production itself, with low lanterns on stage flickering out and the audience and characters being plunged into total darkness, and sometimes total silence, for short periods of the show. This created a platform for some extremely tense moments — listening for any sounds that might help us (collectively) to escape, and immersing the audience in a feeling of entrapment, in the dark, simultaneously alone and together. It also helped to create some of the best comedy when the silence was broken by a character making an entirely inappropriate comment, which worked stupendously. Some beautiful, and very gripping, effects were also created when the theatre was entirely lit by the small torches on the miners’ helmets. This was used to great effect to highlight specific parts of the stage, and also was extremely poignant during one particular moment when, one by one, they were switched off.

Overall, this was a brilliant performance by six actors who conveyed the desperation, and humanity, of their entrapment superbly. Particular mention should go to Cornelius Booth for his portrayal of Chopper, as it is his ‘King Lear’ moment when he states, with a profundity and sadness: ‘All I ever wanted was to make my mark. To say, “I was here. We were here.”’ I also can’t speak highly enough of the quality of writing by Chris Urch, and the intelligent direction by Paul Robinson. The entirety of this performance was incredibly moving, and I shan’t forget its conclusions for a long time.

For a film equivalent which explores parallel issues with similar intensity and sensitivity, look to Pete Postlethwaite’s performance in ‘Brassed Off’. For future performances at the North Wall, please visit their website.