Review: ‘Rosencrantz and Guildenstern are dead’

Postmodernism is sometimes dismissed as a brief period in recent cultural history where all art became nothing but a meaningless exploration of life’s futility. Tom Stoppard’s play Rosencrantz and Guildenstern are Dead, written in 1966, is Postmodernism at its peak. Yet even in 2016, it manages to avoid gimmicks. The play takes two minor characters in Hamlet, and places them centre-stage. What follows is a complex, funny, and tender exploration not just of theatre and performance itself, but of fundamental questions about life, death, and existence.

The play opens with Rosencrantz and Guildenstern, played by Cassian Bilton and Ieuan Perkins, flipping coins over and over again, the coins landing on heads every time. Here, Stoppard crafts a space in which the laws of probability simply do not apply. With every coin toss, he is reminding us of the performative nature of what we are watching, constantly destroying the fourth wall, and inviting the audience into his world where the laws of theatre supersede those of reality. The set in Armchair Theatre Company’s production (currently running at the Keble O’Reilly) was fittingly sparse and minimalist; a blank canvas onto which the actors projected the many theatrical layers which make up Stoppard’s play.

Cassian Bilton and Ieuan Perkins performed brilliantly what is, for long sections, a two-man play. It is in these parts that Stoppard’s debt to Samuel Beckett’s Waiting for Godot becomes clearest, channelling both Beckett and Pinter in the fast-paced exchanges of dialogue between the two main protagonists. The actors captured that swiftness without any misplaced sense of urgency, and successfully exploited Stoppard’s characteristic word-play and winking references to Hamlet. It would have been easy to play these characters as empty Postmodernist caricatures, but Bilton and Perkins injected tenderness into the roles. In the scene where Rosencrantz cheats in order to make Guildenstern guess correctly which hand he has money in, the line “I wanted to make you happy” was met with several audience members’ hearts spontaneously melting. The pair constantly brought out Stoppard’s skill at creating rounded, sympathetic characters, as opposed to mere allegories.

The supporting cast were every bit as assured as the two leads, with the Player (Chloe Wall) oozing confidence, her retorts to Rosencrantz and Guildenstern witty and profound. Will Spence played Alfred as a quivering wreck, and Rory Fraser, playing Polonius, was a caricature of sycophancy which would have been over the top in a production of Hamlet, but proved to be fitting here. Alex Hill was a languid, confident Hamlet, his black clothes encapsulating his angst in a self-conscious, even comic nod to the Hamlet stereotype. As with much Postmodernist writing, there is a distinct awareness of literary history which often morphs into parody and pastiche. 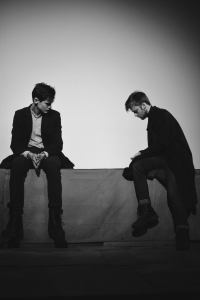 There is a sense in which Postmodernism today can seem trivial, hackneyed, silly, even meaningless. But what makes Stoppard’s play so powerful, and what this production managed to capture convincingly, is that the play is brimming with profundity. Moments of meaningless triviality are interspersed with moments of poignant existentialist angst, to the extent that ostensibly trivial moments become significant.

As the play progresses, the inextricable bonds between performance and reality are tightened. In Act III, Guildenstern’s exasperated exclamation “What are we supposed to do?” is answered by the Player: “This.” The existential question in Stoppard’s play is answered, at least in part, by theatre itself. Stoppard seems to say that when there is nothing else to cling onto, theatre remains.

Rosencrantz and Guildenstern are Dead runs at the Keble O’Reilly from 11-13 February. More information available on the theatre website.