The Fabric of Oxford: An Interview with Felicity Ford

Felicity Ford, also known as KNITSONIK, is an artist who works with wool and sounds, exploring different ways in which to combine the two. The results range from knitted speaker systems to online sound maps and podcasts. John Wadsworth caught up with Felicity to talk about her current project, ‘The Fabric of Oxford’. She will be collecting textile stories for the project from 11am-5pm on Thursday 3rd September, a Darn it & Stitch (on Blue Boar Street, off St Aldate’s).

For those readers unaware of ‘The Fabric of Oxford’, please could you explain a little about what the project entails?

The project explores Oxford through stories and sounds relating to textiles, garments and outfits. I began by listening to oral histories collected by Helen Fountain at the Memory Lane Reminiscence group at the Museum of Oxford, and picking out details about clothes and their relationships to Oxford’s history. From there I began collecting new interviews with different community groups and exploring such topics as how fashion practices have changed; cultures of making and mending within Oxford; the outfits of significant local characters; clothing particular to the identity of Oxford, such as the subfusc worn by graduates and academics, and so on. I am collecting and editing these oral histories and interviews together to create a sonic tapestry, and into this I am weaving sounds associated with those textiles mentioned by the people I have interviewed. This venture will culminate in a performance lecture on December 13th at the Museum of Oxford, with a Sonic Wardrobe installation available for public viewing from January 2016.

When and why was the project conceived?

I wanted to explore the history of the city through personal stories and through textiles. I have been interested in the relationships between site, sound and textiles for a long time. My first piece combining these interests was a knitted sound system playing the sounds of jam being made. I launched this at an exhibition in The Jam Factory in Oxford in 2007. Since then I have created further works examining how our environments, our clothes and our sense of place are linked. In 2012 I recorded sounds on sheep farms around the Lake District and then played these sounds through speakers covered in wool from the same farms; In 2013 I explored the relationships between the Shetland landscape and Shetland wool, examining how oral histories and sound recordings can help us to more deeply appreciate the provenance and history of this particular textile. I distributed knitting patterns enabling knitters to create their own wool-covered speakers, and I created an online sound map called “Listening to Shetland Wool”, from which knitters could read about and download sounds to play through their knitted speakers. I also created a podcast in 2014 called ‘Finding the Fabric of the Place’, investigating the relationships between site, sound and textiles. Last year I raised £12,000 on Kickstarter to self-publish a book about knitting from everyday inspirations in your environment, and I am currently working on an album of sounds that accompanies this book. When the Museum of Oxford and OCM approached me regarding the 40th anniversary celebrations of the Museum, I was excited to see what might be revealed by looking at the city through the stories of its textiles and related sounds.

What has the response been so far?

I’ve had a really rich experience talking with people of different ages from diverse backgrounds, about everything from what they wore to their wedding, to the politics of clothing within roller derby, and from what one wears for belly dancing, to what people remember learning at school about crafts such as knitting and sewing. I think in some ways we take clothing very much for granted, but in the conversations that have grown around this project, I’ve found that most folks seem to enjoy reflecting on their favourite outfits, special memories, or some aspect of their life and work in Oxford. The beauty of starting with something like textiles is that everyone can contribute a story because everyone wears clothes and uses fabric in daily life. I think sometimes the most interesting things are right in front of us.

Why do you think that sound artistry and textiles complement each other so well?

Sound recordings are hugely descriptive of textures. Just think about the sound of velcro, a zipper, poppers on a cardigan or the swish of a skirt – these sounds all say so much about the materials and objects involved. The little hooks in velcro, the tines on a zipper, the metal or plastic nature of garment poppers, or whether a skirt is made of silk or jersey. You can also tell so much about the kinds of mechanisms involved when you listen to their sounds. The rhythm of a loom, the twirling of a spinning wheel, even the clanking sounds of plastic coat hangers in shops on the High Street or the humming of the fluorescent lights they so often have on in the changing rooms. Then there are outfits that are in themselves designed to be noisy, like those worn by Morris Dancers with bells at the Oxford Folk Festival or on May Morning. All these garments and their sounds are tiny elements that contribute to the overall texture and atmosphere of the city, and to me these sounds are close to the sense of touch which we also associate with personal experiences of wearing clothes.

Sounds are also very descriptive of places and our experiences within them. The draughty sounds of creaky old university buildings echo in a different way to the saturated sounds within a shiny shopping centre, and streets sound different depending on the quantity of cyclists or drivers, and on whether they are covered in cobblestones or tarmac. I love the idea that these two textural worlds – of textiles and of place – can be seamed together with the thread of a story, a narrative, that connects those things.

Many stories collected so far refer to clothes that are now lost or have been thrown away; talking about them creates a record or document of their existence, and the absence of a photo means that listeners can fill the gaps with their own knowledge and memories of clothes. I very much want to emphasise in this project the relationship between history and the present, and to underline the fact that we are always making history. It’s fascinating to listen to interviews from today in which people talk about buying clothes on eBay or Amazon and then to talk to someone in their nineties who remembers the independent businesses on the High Street from which they brought their clothes in their youth. Fashion practices have changed so much, as have the methods by which our clothes are mostly made and worn. I think these changes are interesting, and working with sounds enables many voices and perspectives to be simultaneously present within one large and complex conversation. Without that quality of voices speaking, it’s harder to create that sense of conversation, so sound is really important in that way too. 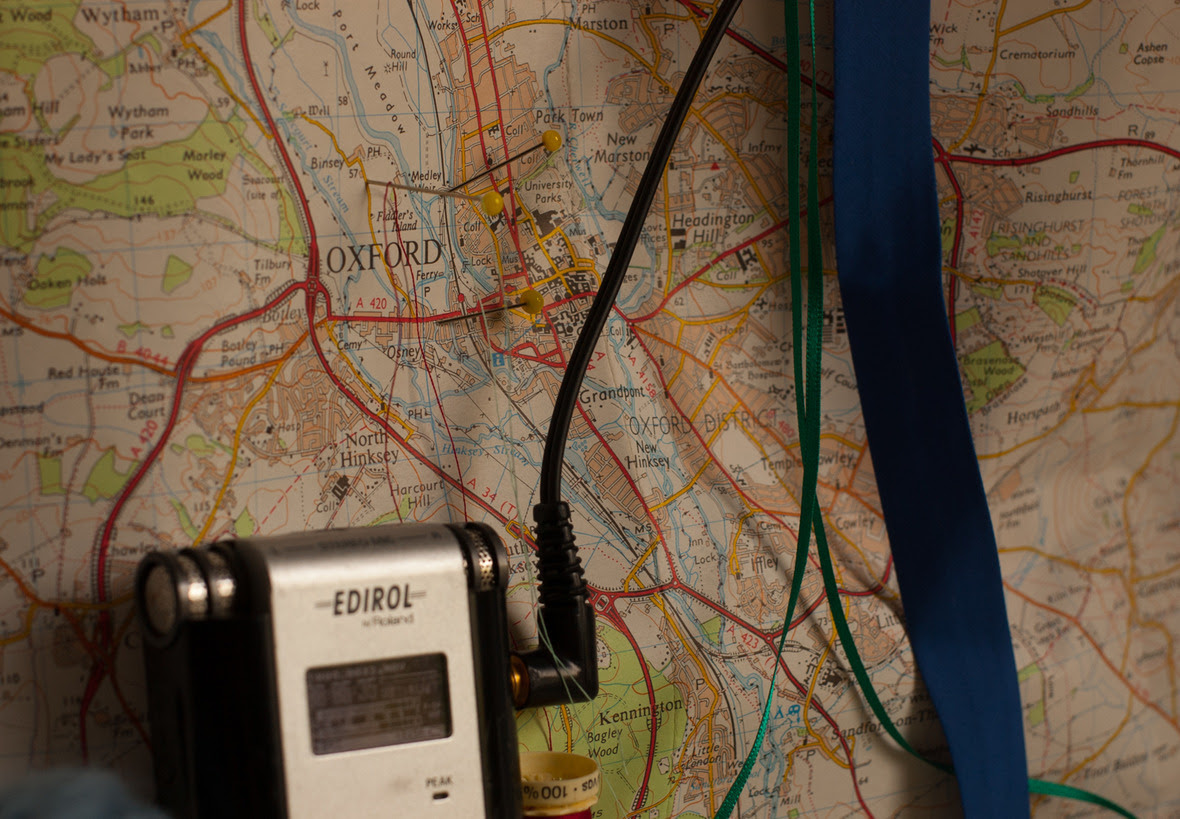 How shaped by the stories you collect will your performance be, and how much have you planned out already?

My performance and installation will be entirely shaped by the conversations I have had so far and by the stories I have collected. I really believe that if you are working with the community it makes sense to go in with a blank sheet of paper and to let all the interactions that happen through the project become the shaping force.

How will ‘The Fabric of Oxford’ fit into the Museum of Oxford’s wider celebrations?

One of the things I love best about the Museum of Oxford is how it reveals a timeline of the city. How wonderful to be able to see the old stones on which earlier inhabitants of the city walked! To see the clothes once worn here and the rugs once laid on kitchen floors. However, the Museum also focuses on connecting that past with the present, and in making its artefacts meaningful to the people who live here now. Outreach activities such as the Memory Lane Reminiscence Group engage the community with the history of Oxford in a way that is alive and current, and you also can see the same ethos in the Museum’s decision to tell Oxford’s story with artefacts chosen by the local community for the ’40 years, 40 objects’ exhibition.

‘The Fabric of Oxford’ speaks to these values. I will work to highlight connections between objects in the ’40 years, 40 objects’ exhibition; stories I have found whilst working on this project; and the textiles worn and enjoyed by those who attend the lecture performance and exhibition. In highlighting our connections to history through everyday lifestyles and things, and in exploring the particularities of this wonderful city through the shared language of clothing and textiles, I want to amplify the idea that history is not one story but many stories woven into a whole. This is related to the Museum’s inclusive approach to exploring the past as a compass for the present. That is how ‘The Fabric of Oxford’ fits into the Museum of Oxford’s wider celebrations.

Felicity Ford, a.k.a. KNITSONIK will be collecting textile stories for the project from 11am-5pm on Thursday 3rd September, a Darn it & Stitch (on Blue Boar Street, off St Aldate’s). You can hear some of the stories collected so far by visiting Felicity’s Soundcloud page here.