Simon Wroe is a freelance journalist, former chef, and author of the novel Chop Chop. As a journalist, he has contributed to a range of publications including The Economist, The Guardian, and Prospect magazine. His first novel, Chop Chop, was shortlisted for the 2014 Costa First Novel Award and longlisted for the 2015 Desmond Elliott Prize. We met up with him ahead of his talk for The Oxford Writers’ Circle on May 14th.

For those readers that don’t yet know the novel, please could you give a brief account of Chop Chop?

Chop Chop is a rather frenetic, seamy tale of a young English Literature graduate who goes to work in a gastropub in Camden Town, a rather grubby, aspiring pub that is slightly on its last legs and run by a sadistic head chef. The protagonist [nicknamed Monocle] is in over his head. To employ a term overused in publishing, it’s a coming-of-age story, but one that grows increasingly dark and strange as the novel progresses, as we are drawn into this underworld of unpleasant dinner parties and dastardly deeds. Chefs are a mad breed, and the book tries to capture that.

Chop Chop is garnished with countless culinary references, and there is even a glossary provided in Chapter Seven. The positioning of the glossary here is rather unusual, with the narrator explaining this as being due to pressure from other characters less aware of literary conventions. What was your reasoning behind this choice?

Two things should be explained at this point. One is that the book does have a somewhat unorthodox structure to it, and part of its unique framework is the device that it is always being edited and overseen by two of the other chefs that our protagonist works with. These chefs are rather unliterary, and are essentially a foil to Monocle’s pretensions and illusions. They continually keep the narrative on track, and keep him tethered whenever his prose is in danger of becoming too purple. As a result of that, there is a certain freewheeling quality to the structure.

When I wrote the book, I wrote it more with tone and voice in mind, and with the speed at which I wanted to move through the book. I knew, almost before anything else, that it had to be breathless. I wanted it to have this quality of turning around an idea, settling on it, moving off it, coming back to it, exploring it with greater length, giving snapshots of  characters, getting carried off with the kitchen momentum, then being reintroduced to them in another form. I wanted the structure to reflect that.

If you put a glossary at the end, no-one will read it. If you put it at the beginning, it’s too formal; it says, ‘This is an essay, or an anthropological study of cheffing.’ I didn’t want either of those things. I didn’t want it to be as ‘correct’ as that – a formal account or rendition of anything – I wanted it to be scruffy and barrelling forwards, moving in an arc of motion, and I felt that that was more important than subtler choices that I could have made. 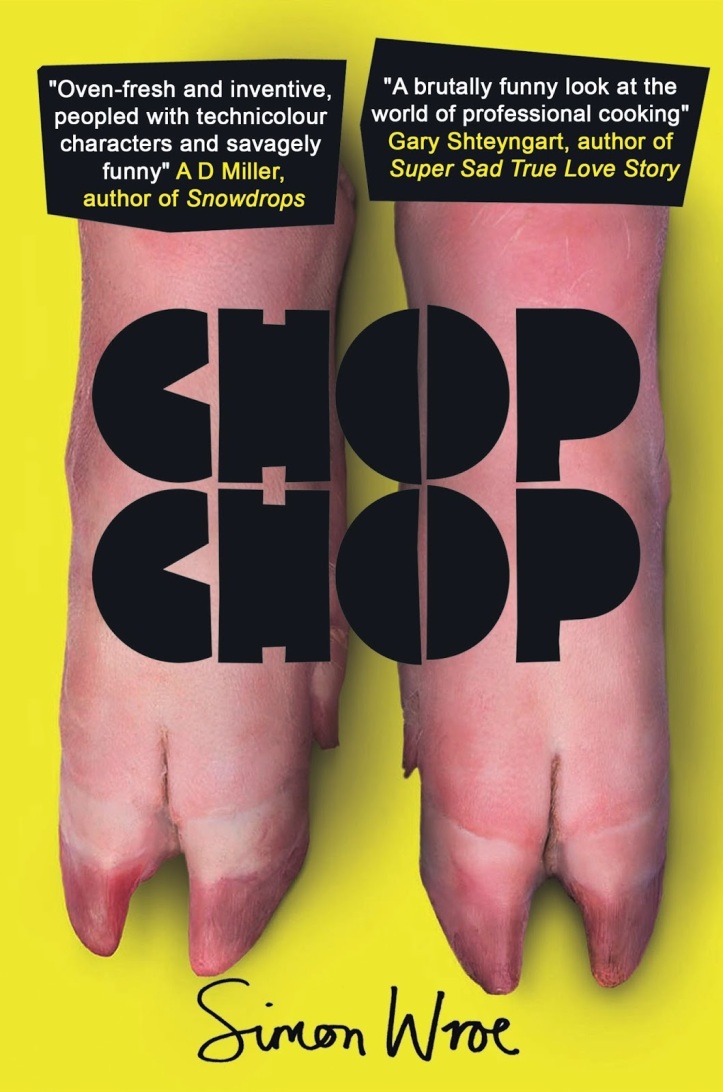 Do you feel that beyond the obvious – say, the extended vocabulary – knowledge of the culinary has impacted your writing?

I think that cheffing as a profession has definitely had some influence on my writing. In that world, there is an amazing dichotomy between high culture and low. You have this exclusive French terminology – you don’t talk about a handful of watercress, you talk about a peluche, for example – used by this great, roiling underworld. There are chefs that scream at each other, that call each other the worst things under the sun, and you see these things sitting side by side in ways that you don’t in most other cultural situations.

I’ve seen people punch each other in the face over pommes dauphinoise, and a lot of writing misses that juxtaposition. One writer that is good at marrying the high and the low is Pinter. There’s that line in The Homecoming, when he talks about a ‘penchant for buggery’, with the tension between those neighbouring terms.

When I worked in kitchens, I was always an outsider. Like Monocle, I was an English Lit student, and many other chefs would ask me, ‘Why would you go to university to study English? I can speak English.’ One of the chefs said, ‘Why would you write? Writing is like masturbating with a pen.’ Some writing is universally timeless and relevant, but some really is dangerously close to being masturbatory, and I too am guilty of those onanistic urges. If I find myself moving into that territory, I have to stop and think, ‘Am I being showy or pretentious? Am I using long words without due cause?’

I think that cheffing has slapped that out of me; it has taken the preciousness from my writing. Some modern writing is written in a little bubble by gentlefolk to be read by gentlefolk, and misses the marrow of life because of it, or perhaps doesn’t have a wish to engage with it. I feel that cheffing has given to me a foot in the world, and a reminder to keep it there.

Many of Chop Chop’s reviews are keen to point out the similarities between you and your protagonist. Do you think it’s useful to attempt to discern fact from fiction, or would you rather you were considered completely separately from your characters?

I have mixed feelings about it. Generally, when you write a work of fiction, it’s the first thing that people ask you: ‘How much is this based on you? Is that what you’re like?’ There’s a desperate obsession with joining the dots and making everything mirror life, and I’ve never understood it really. I wish that it were not so, but I also feel that I have made my own bed on this occasion. I took certain autobiographical parts of what happened to me and transposed them into fiction, so I must live by that and suffer the comparisons.

What I think is interesting is that people are never really happy with the answers that you give on that question. I’ve never been able to tell whether when people say it about my book, it’s praise or criticism, or neither. Some people feel that they’ve been cheated but I would consider that proper fiction writing. I met the people and saw the world, then I wrote about it. I didn’t sit in a room in Berkhamsted and imagine it. Doing the latter leads you to write something that is flat and doesn’t come off the page, that doesn’t feel like you just brushed up against that person in the pub. If you say that your writing is nothing to do with your life, people aren’t happy with that either, because it feels disconnected in some way, like you’re disowning your own work, or as if you’ve put no part of yourself into that book.

Chop Chop was nominated for a Costa Book Award. What are your thoughts on such nominations – ‘Costa-Book-Award-nominee’ – becoming an ever-present prefix for an author?

Maybe I should insist on that honorific. Honestly, though, I don’t mind it. I think that it’s so hard to get any sort of notice as a debut author, even if you’re published by a big publisher. So many books sink without a trace; they have a little flurry of interviews or book events, then they just disappear. That is the fate of almost all books. I feel immensely lucky that Chop Chop got picked up [by the Costa Book Awards], because otherwise it would have been the fate of mine too. On the back of one prize listing, you get others, and it does wonders. Essentially, it’s the best thing that can happen to a book, better than a good review or a celebrity endorsement, and in that respect, it’s really important.

You can follow Simon on on Tumblr, and on Twitter @simon_wroe. ‘Chop Chop’ is out now in paperback, RRP £8.99 pub. Penguin Books.