Review: ‘As I Crossed a Bridge of Dreams’

As I Crossed A Bridge of Dreams, currently running at the Burton Taylor Studio, is an adaptation of the classic Japanese text The Sarashina Diary. Written around 1060, the diary was penned by an unknown woman of noble birth, documenting her life from age 12 through her marriage, loss of her sister, and travels across the provinces to the capital. In Harriet Rowe and Laura Cull’s adaptation, the emphasis is on the fluid boundary between reality and dreams, as the protagonist interweaves her life story with the tales she read as a young woman. Through these we see her longing for a husband, and her reactions to the various losses she experiences. Cull and her creative team opted for a multimedia approach, integrating dance, lighting design by Katrin Padel, and an original score by Marco Galvani. While this allowed for some captivating moments, as a whole this production was unfortunately unconvincing, failing to capture the ethereal quality needed to believe in the simultaneity of dreamed and lived experience.

The production’s minimal aesthetic – bare stage and actors dressed entirely in black – was well chosen, allowing the actors to create temples, provinces, and forests through language without obtrusive stage sets. The willowy, dark bodies seemed to evoke the ink lines of Japanese scripts or ink wash paintings, creating an embodied textuality within the performance space. Padel’s lighting design was one of the most effective aspects of the production, creating subtle mood changes that evoked the continually changing seasons. This was largely complemented by Galvani’s score, although it was difficult to judge the score in its entirety as the cellist – half of the string duo for which the music is scored – was ill. Having the second instrument would certainly have provided a greater intimacy to the scoring, in keeping with the Lady’s anxieties about her lack of a lover and her desire for a Prince, of the kind she reads about in her stories. I assume that the silences where the script explicitly invokes sound – such as the moment where Sarashina is invited to listen to the noises of a chapel – would usually have been filled by the cello part. If intentional, the silences could, in another setting, have contributed to the decreasing division between dreams and reality as the chapel sounds would resonate only in Sarashina’s mind, inaudible to the audience. However, in context of the rest of the production, the silences at these moments seemed incongruous. 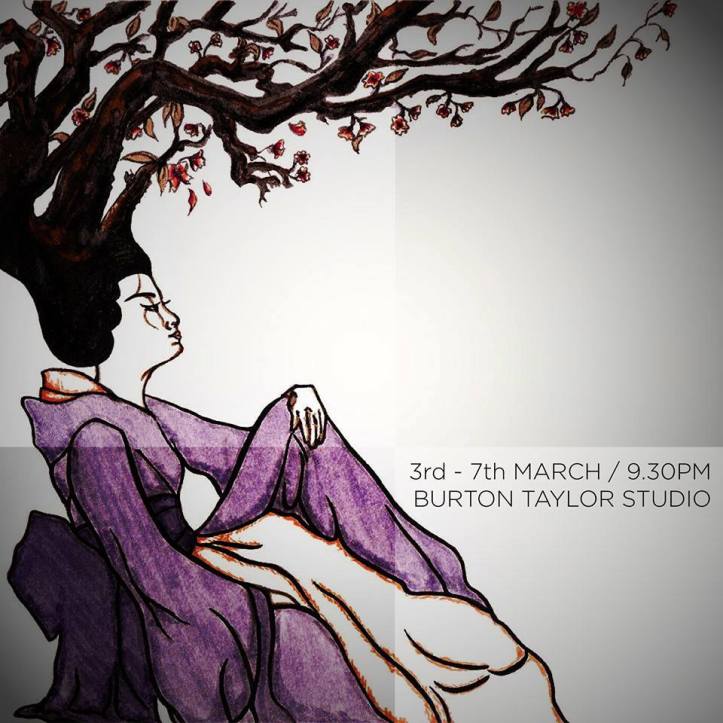 The cast worked well as an ensemble, with Chloe Cheung in particular melting seamlessly between the multiple roles that she was required to play. However, they fell a little short of the postmodern blending of bodies and media that was being aimed for. As I Crossed A Bridge of Dreams is a play as much about its meta-theatrical creation as the protagonist’s journeys, creating embedded narratives that lie in a liminal conceptual space. Theoretically, the combination of media and performance techniques was perfectly placed to conjure up the fantasy world that Sarashina inhabits, and in many places this proved to be the case. Some of the strongest moments were the dance sequences, beautifully executed by Marta Valentina Arnaldi and Steven Doran, in particular the scene when the lovers in Sarashina’s tales destroy a bridge to prevent access to the province they have eloped to. However whilst talented dancers, they seemed to have some difficulty adapting to their acting roles (and vice versa, when the actors were called upon to dance), meaning that the transitions between the stories the protagonist reads and tells were not as smooth as they needed to be. Although the musicians had been placed on the stage, making the creation of the auditory imaginary visible to both actors and audience, there was little interaction between the violinist and the characters, the former instead resolutely focused on the sound box. This may well have been because the cellist was absent, and it is no doubt difficult to coordinate with a partly pre-recorded score as well as the actors live on stage, but having a visual detachment from the on-stage action erected barriers within the performance space that were unconducive to any creation of an ethereal cohesion.

As I Crossed a Bridge of Dreams is a sensitive adaptation and translation of the original text, and while there are highly commendable elements in the production, the premise ultimately promised more than was delivered on this occasion.

‘As I Crossed A Bridge of Dreams’ runs until Saturday 7th March at the Burton Taylor Studio; tickets are available here.