Last Wednesday’s ‘Narrative and Proof’ event, hosted by The Oxford Research Centre for the Humanities (TORCH) and the Mathematical Institute, had been hotly anticipated since before Christmas. In the week leading up to the event, those who had managed to obtain – free – tickets could feel increasingly lucky, as the event was fully booked and the organizers had to create an overflow room with a video feed, as well as a live webcast, to accommodate the demand. The lecture hall was packed with an exciting and extremely varied crowd, from high school students to professors.

‘Narrative and Proof’ was organized as a part of TORCH’s headline series ‘Humanities and Science,’ a programme with a focus on the added value that interdisciplinary research can bring, in terms of both new insights and new research questions. This event kicked off the new year for this collaborative enterprise by presenting an impressive group of speakers to address the topic of interdisciplinary interaction between maths and the humanities, exploring the extent to which narrative underpins mathematical proofs. The main speaker was Marcus du Sautoy (Charles Simonyi Professor for the Public Understanding of Science, Professor of Mathematics, popular science writer, TV personality and playwright) who argued that narrative = proof. Responses were then given by novelist Ben Okri, mathematical physicist Sir Roger Penrose, and Laura Marcus, Professor of English Literature.

Du Sautoy’s background as a TV presenter and actor became clear in his lucid and engaging presentation. Although taking Jorge Luis Borges as a guiding storyline has been done before by many science popularizers, du Sautoy managed to shed new light on the story ‘The Library of Babel’ through arguing that the library contains nothing precisely because it contains everything that can ever be written. He claimed that mathematics does not simply entail writing down facts about numbers: a mathematician’s job is to discern and choose. His most interesting point was that a proof should not be too hard, nor too easy to follow, while at first sight one may think that mathematicians are looking for the simplest proof possible. Explaining that a great mathematical proof should be like a journey from the familiar to the new, he used a Lord of the Rings analogy for clarification – funny and clear, but in Oxford one really hears too many of those. His final point, concerning the use of geometry in novels, was less convincing: here he simply summed up a few novels that contain geometrical structures, such as Eleanor Catton’s The Luminaries, without making a more profound connection between narrative and geometry.

Ben Okri had prepared two responses to du Sautoy, one written, one typed, and in truly democratic fashion let his audience decide which he should read out. The audience decided in favour of the handwritten response, but one may wonder if this turned out to be the right choice. Okri’s opening words were profound, though: “Narrative is woven into the fabric of consciousness as mathematics is woven into the fabric of the world.” However, his subsequent argumentation on the differences between narrative and proof were not entirely convincing.

Sir Roger Penrose offered an insightful comparison between the DPhil, where the proof is much more important than the narrative, and science popularizations, where the narrative is more important than proof. Incidentally, Penrose is one of the few people to have written a science popularization that contains an impressive amount of mathematics, the thousand-page tome The Road to Reality. Turning to the whiteboard to refer to the Pythagorean theorem, he convincingly argued that mathematics is driven by beauty. 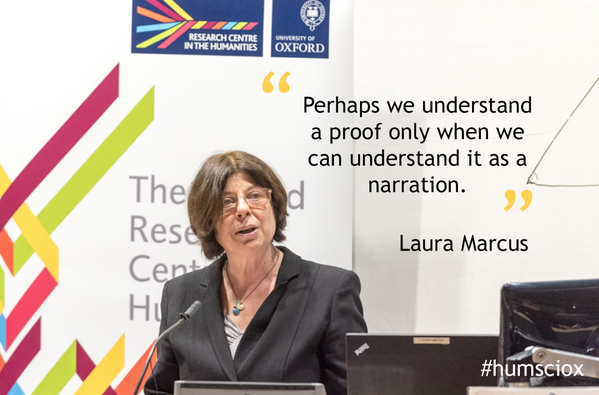 Professor Laura Marcus closed the panel session with an excellent response, and it is unfortunate that she did not have more time to deliver her talk. She elaborated on the point already made by Penrose, emphasising that in films about science the proof is often not given a narrative form at all, as it is reduced to blackboard scribbles that are meant to remain a mystery. She also gave great examples of the use of mathematics for world-making in literature, from Thomas Pynchon via Edwin Abbott Abbott’s Flatland to Alice in Wonderland.

In the question and answer session, the audience proved itself remarkably knowledgeable and insightful, highlighting the most important omissions in the talks. This proved slightly awkward for the speakers: the first question, for instance, on the topic of truth, exposed the fact that this essential point had not once been touched upon in the talks. The same goes for another question on the topic of subjectivity versus objectivity. Fortunately, the questions all led to interesting discussions, although the speakers avoided direct confrontation with each other. In this respect, the evening was a showcase of interdisciplinary collaboration, and fortunately we had the audience to really bring this forth.

The full video of the event can be accessed here. For more information about TORCH and their forthcoming events, please visit their website.