Found in Translation: “The Serious Game”

‘You didn’t want my forgiveness. You spat on it. But I want yours! Forgive me!’

Thus speaks the protagonist of The Serious Game by Hjalmar Söderberg, who shot to fame with the publication of Förvillelser in 1897. He became one of Sweden’s most prominent modernist authors, more famous today for Doktor Glas, a story of murder and moral quandary (and the subject of a later blog post).

Published in 1912, The Serious Game was Söderberg’s most successful book, and tells the story of journalist Arvid Stjärnblom and his love affair with his childhood sweetheart Lydia Stille. Set in Stockholm at the turn of the century, Lydia and Arvid are swept into separate, unenthusiastic marriages, and from this starting point the novel explores the possibility of love and desire when free will is set against the forces of fate. Arvid’s fellow journalist Markel says to him ‘You do not choose your destiny … Just as you don’t choose your wife, your lover, or your children. You get them, and you have them, and possibly you lose them. But you do not choose them!’, and this idea recurs throughout the book, Lydia later writing that her affair ‘was also a desire to find out whether I could intervene in the fate of another.’ Interwoven with this attempt to escape predetermination is an anxiety about moral certainty and the human propensity to sacrifice duty to desire. After he commits adultery, Arvid reflects that ‘I have always believed – well, one knows oneself so poorly – but up to now I have always believed that I was an honest and straightforward person … Now I find myself in situation that make falsehood, trickery and lies almost daily necessities, and I realize to my surprise that I have talents in these realms, as well…’ 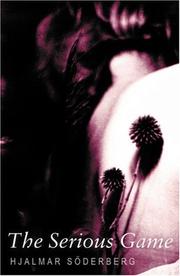 There may be a somewhat autobiographical aspect about the story: Söderberg had an unhappy marriage, and from 1903-1912 he conducted an affair with a married woman, Maria von Platen, after she wrote him a letter of admiration concerning his earlier novel The Youth of Martin Birck. Whether Söderberg would approve of any autobiographical reading, however, is another matter; the relationship between writing and biography is a source of subtle humour throughout the book, the character Henrik Rissler expressing displeasure that Strindberg set a precedent for readers expecting the author’s life and personality to be poured onto the page, meaning that ‘the public … believe that no writer is capable today of thinking up enough lies to fill a book.’

This brings me to one of my favourite aspects of this book, which is the way that Söderberg draws you into early twentieth-century Sweden by weaving references to contemporaneous literature, politics, and musical culture into the narrative. The works of August Strindberg, Sweden’s most famous playwright and Söderberg’s approximate contemporary, make several appearances, as do Henrik Ibsen, Guy de Maupassant, and Emile Zola. (In fact, The Serious Game will appeal to fans of Zola and Maupassant, the newspaper office and attendant journalistic culture in which Arvid works reminding me distinctly of Bel-Ami.) These references place Söderberg within a dense modernist network that spread across Europe and Scandinavia, with authors, artists, actors, and musicians exchanging ideas across geographical borders, a far cry from the idea of Scandinavia as a mythical, idealised ‘North’ that is detached from the rest of the world.

Even for those with no interest whatsoever in early modernism and its political context, Söderberg does not disappoint. He paints captivating images of both rural and cosmopolitan Sweden in beautiful, lyrical prose; Lydia’s father is a painter, and Söderberg describes his work as follows:

He painted pine trees. They used to say that he had discovered the island pine, just as Edward Bergh had discovered the northern Swedish birch grove. He preferred his pines in sunshine after rain, with the trunks still wet and glistening. But he needed neither rain nor sunshine: he knew it all by heart. He also enjoyed painting the red reflections of the evening sun on the thin, pale-red bark at the tops of the trees and on the twisted, knotty branches.

His style bridges the gap between realism and impressionism, having none of the dense detail of Flaubert, instead striking at the core of a landscape through a glistening surface. He picks out salient details that capture the atmosphere and sense of locality perfectly, such as his description of Stockholm in April:

When you walked a short distance outside of the city, the roads were still edged by high banks of dirty snow – winter remained, ailing and dying. But inside the city the streets were clean and shining in the sun. The waters of the Norrström glittered, rushed and foamed, and in Kungsträdgården the first poor, swarthy little Italians were selling small red, blue and green balloons – it was almost as if spring had really come.

This extends not only to the setting, but to the characterisation as well, the initial description of the Baron Freutiger being such an example.

This book is so multi-faceted that it stands up to multiple readings, and each time you will take away something different. I rarely reread books (why return to words when there are so many new ones to explore!), but I find myself repeatedly revisiting The Serious Game and I feel that it has not yet exhausted its possibilities. I have read it as a meditation on love and deception; an exploration of the psychological impact of moral conflict; an extended comment upon fin-de-siècle Swedish politics and society; a feminist exposition in a similar vein to Ibsen’s Doll’s House where the final joke is on Arvid; a slightly chauvinistic piece in which women do not hold a place in modern society except to satisfy or deny male desires; and a tender eulogy to the delusion of passion. I look forward to whatever the next reading will bring.