Philip Glass’ eighteenth opera shows ten different episodes from Galileo’s life in reverse chronological order. Beginning with the blind Galileo lamenting that which he can no longer see the day before his death, the opera culminates with Galileo as a young boy watching an early opera by his father on the subject of Orion. Along the way, we witness his interrogation and recantation, the characters of A Dialogue Concerning the Two Chief World Systems come alive and discourse, Galileo discusses his new book with his friend Cardinal Barberini and teaches his daughter about the motion of a pendulum, and immediately preceding the opera within an opera, Galileo presents his telescope to the Duchess and women of the court before he and the Duchess reminisce about the same opera.

New Chamber Opera’s production (omitting the third scene, where Galileo’s daughter sends him letters of love and support) took place in the antechapel of New College, a space that encapsulates some of the tensions between intimacy and grand historical events that are present throughout the opera. The stage area was set in front of the screen into the chapel proper, and the audience seated on the same level in a semicircle around the stage.  This small space, coupled with the soaring ceiling of the chapel, gave a sense of intimacy to Galileo’s discussion with his daughter, and the discussion with Cardinal Barberini (powerfully and profoundly sung by Daniel Tate), but the instrumental interlude that acts as a commentary to Galileo’s experiments allows the audience’s focus to open up into the tall space – suitable for an astronomer that opened up the heavens with his telescope.

However, an attempt to highlight the isolation of the dying Galileo by placing Nick Pritchard on top of a column of scaffolding set behind one side of the audience was highly atmospheric, but lost out rather to the fact that half of the audience then could not see him. Arguably, this opening scene in which only Galileo sings should be the most intimate (balancing the large forces for the Orion Opera at the end), but the emotional effect was negated by a lack of diction from Pritchard during the scene, and no possibility of visually engaging with the character. This was a shame, as Pritchard’s voice was one of the highlights of the opera.

Similarly, more could have been made of the contrast between the cardinals speaking in third person in their interrogation of Galileo and calls for his recantation, and Galileo’s direct utterances. Though Pritchard was at a disadvantage in the recantation scene by still being on top of his pillar, more could have been made of the repetition of text for emphasis, matching Glass’ minimalist score. The cardinals themselves (and Daniel Tate as the Pope) were highly effective in their almost mechanistic unison, and ensemble throughout the opera was a strong point aided by excellent direction from Harry Sever. 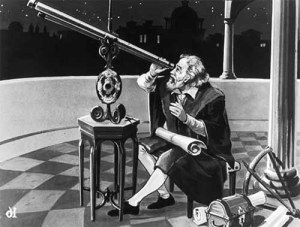 The singing from the cast was superb throughout, although the men were especially strong in this production. Likewise, the instrumentalists coped very well with a metrically demanding minimalist score, and especial mention should be made of the percussion, who provided an indispensable rhythmic backbone. However, the production missed some opportunities to play with levels of intimacy between stage and audience, and occasionally detracted from the excellent singing of the cast. Overall, a fine addition to the celebration of Galileo Galilei’s four-hundred and forty-ninth birthday.