The Cobalt Collective are a new local non-profit art collective established by two recent Fine Arts and Graphics graduates. The group are dedicated to promoting local artists and providing them with an exhibition platform; their first exhibition will open at Java & Co. Oxford, running from Friday 14th – Monday 17th December.

Approximately 25 artists will have works on display within a variety of media, and a majority of the works will be for sale. With so many local artists contributing to the exhibition, scenes and landmarks in Oxford are a popular subject. One such example is Sally Barton‘s Outside the Theatre (shown left) which will be one of the paintings on display. Capturing a street scene outside Oxford’s New Theatre, Sally’s source of inspiration for this watercolour was the juxtaposition of current advertising campaigns set against the 1930s theatre exterior. Sally has worked as an illustrator, visualiser and storyboard artist for over twenty years, originally based in London and now near Reading in Berkshire.

This will appear alongside Joseph Davis’ The Chequers – Oxford Pub Crawl Series (shown right). Having studied at both Mixed Media Fine Art and the University of 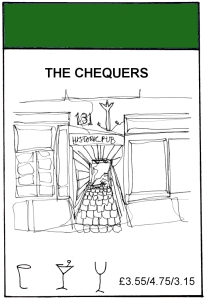 Westminster, Joseph is based in Oxford and London and exhibits regularly. More of his work can be seen here.  He says of his work that it “explores the idea of adding value to mundane objects and situations, through various mediums and decisions.”

The Cobalt Collective’s Exhibition will run from Friday 14th December – Monday 17th December at Java & Co., 35 New Inn Hall Street, OX1 2DH according to Java’s opening hours. The private preview will be held on Thursday 13th December at 8.30pm. To find out more about the Collective, please visit their website, Facebook page, or email them at cobaltcollective@live.com. They are also on Twitter @CobltCollective.